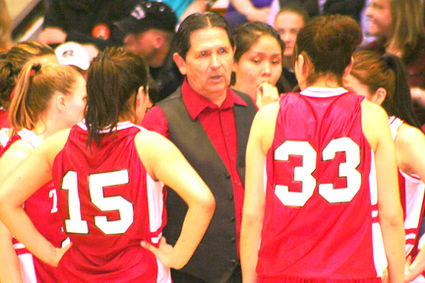 Coach Lyle “Dusty” LeBeau has led countless numbers of Oglala Lakota youth to success on and off the basketball court during his 25 years of coaching hoops on the Pine Ridge reservation. He will be officially recognized as a member of the South Dakota Sports Hall of Fame in April 2013.

PORCUPINE, SD—Lyle “Dusty” LeBeau, an Oglala Lakota from Porcupine, has been chosen to enter the South Dakota Sports Hall of Fame.

LeBeau is one of 11 South Dakotans selected to enter the Hall of Fame this year.

He is joined by golfer Kris Tschetter, Olympian Rod DeHaven and coaches Gary Munsen, Don Meyer, Bob Schroeder and Curt Fredrickson. In addition, several athletes were selected for the honor, including Harold Thune, LeRoy Carlson and James A. “Pev” Evans. Also, referee Pal Christensen will be inducted in April 2013 along with the other nominees.

LeBeau is among a very exclusive fraternity of Native American coaches who have won the state tournament in South Dakota, a group that includes Jesse Mendoza, who did it at Pine Ridge, and Eldon Marshall at White River.

Over the course of his 25 years in coaching, LeBeau has had an unprecedented amount of success. Entering the upcoming season, he has a combined coaching record for boys and girls of 529-164 and a winning percentage of .689.

He started his career at Red Cloud Indian School on the Pine Ridge Reservation in 1987 as the school’s girls’ basketball coach, where he coached the Lady Crusaders to their first-ever state tournament appearance that year. He would go on to take the girls program at Red Cloud to new heights, appearing in the state tournament three more times — in 1991, 1992 and 1995.

In addition to coaching Red Cloud’s girls to numerous state title appearances, he was able to duplicate the success he had at Red Cloud at crosstown rival Pine Ridge High School, where he guided the Lady Thorpes basketball team to three state tournament appearances in 2004, 2009 and 2010. The 2009 team won it all with a victory over Dell Rapids.

In a story book-esque run in 1995 he captured the state title while at Red Cloud. An accomplishment that was made possible by a 60-foot, game-winning bank shot in the district championship by his nephew Jesse LeBeau as time expired. The miracle shot gave the Crusaders a victory over a talent and size-laden Little Wound Mustangs team, whom many had expected to upset the Crusaders.

To complete the dream season, his son Jerome LeBeau made an inspirational appearance in the state championship game a night after severely hyper extending his knee. To those who witnessed the display of courage, it evoked memories of Willis Reed overcoming a bad hip to lead the New York Knicks to victory in the 1970 NBA finals.

After leaving Red Cloud he would coach at Little Wound where he would make appearances with the boys in the 1999 and 2000 state basketball tournaments, respectively.

In 2002, Dusty LeBeau led a resurgence of the Pine Ridge High School boys basketball program when he took three consecutive teams to the state tournament in 2002, 2003 and 2004.

Not renowned for being a tactician, LeBeau is widely recognized as a master motivator with an uncanny ability to maximize his players’ ability.

Having coached his entire career in the highly competitive Class A division of South Dakota high school athletics, LeBeau has taken an astounding 18 different basketball teams to the state tournament. In a state with as rich a basketball tradition as South Dakota, this is an extremely significant accomplishment.

LeBeau and the other nominees will officially be inducted into the South Dakota Sports Hall of Fame on April 13, 2013.