America at the crossroads: Stand for life, righteousness, and mercy

We are at a crossroads! It is crisis time in America. In less than two months, Americans will be going to the polls to vote for the next President of the United States. They will also be choosing members of Congress, state governors, judges, council members, school superintendents—basically all those in authority.

This is perhaps the most uncertain election Americans have ever faced—certainly in my lifetime. Not only uncertain about the election results but also the direction the country is heading.

This will be the last issue of Indian Life you will receive before Americans go to the polls and while we try to stay away from political issues, we feel that this is one time we must speak out. I’d like to share with you some thoughts gleaned and adapted from an email written by Arni Klein of Emmaus Way in Israel.

We’ve been told by both parties that voters have a clear choice as to the direction they wish the country to go. However, while the issues are clear, the message is muffled and non-distinct. Throughout this campaign, voters are getting mixed messages, half truths, and outright lies.

Many voters will cast their vote with the hope of getting out of the mess the country is in. People are hurting, desperate, and very impatient. People are looking to the government to save them and the country. But not everyone. We are well aware that there is a stirring rumbling across America and stretching out to the nations.

There is a cry that’s waking up a mass of people. These people have finally come to realize that what we’re doing is not working and electing new leaders is not dealing with the problem.

So here’s the question voters need to ask: Do we just want the symptoms to go away or do we want to deal with the problem at its roots?

Many people are satisfied just for the pain to go away instead of dealing with what’s causing the pain. Can you imagine building a house without a good foundation and then relying on Creator to keep it standing during a hurricane or tornado?

In this election, voters are not only dealing with issues of the economy, they are also voting on values-issues such as whether or not to remove all restrictions against abortion or whether to protect life, and give a voice to those who have no voice—the unborn.

They are voting on issues of religious freedom. Voters are also considering issues dealing with the morality of same-sex marriage.

Do we understand the root of our problem? The questions we should be asking are: How did things get to be this way? Is the main concern that God remove the rotten fruit and bless us with health and prosperity?

Recently I received a call to join in corporate daily prayer for our nation. The letter recalled that during World War Two, an advisor to British Prime Minister Winston Churchill gathered together a group of people who, each day at a specific hour, would drop everything they were doing to collectively pray for God’s protection over England.

Second Chronicles 7:14 is a call for God’s people to humble themselves and pray and seek God’s face. It continues: “and turn from their wicked ways, then I will hear from heaven, will forgive their sin, and will heal their land.”

Discerning the difference between what’s good and perfect is a fine line; we can easily get caught up dealing with symptoms and not get to the cause. That’s not to say we should allow ungodly expressions to go unchecked while we search for the root, but we need to know that if we don’t get to the source, another problem will just surface somewhere else.

We are not here to tell you who to vote for. But I am here to ask you to examine both presidential candidates and their parties and then seek God’s face as to the choice you make. Stand with us on the side of life, liberty, righteousness, and mercy.

May God help us to see God, see ourselves, see what He sees, and see what He wants us to do.

—Thanks to Arni Klein of Emmaus Way for his inspiration in writing the above. 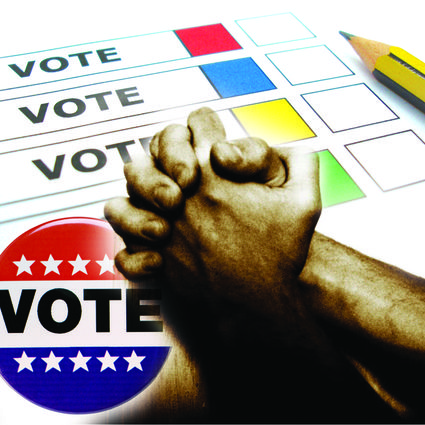