By Russell Hulstine and Craig Day
News on 6 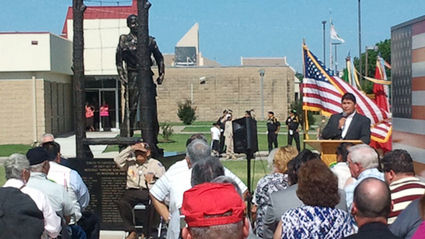 Eighteen members of the Muscogee Creek Nation were POWs. Three POWs died in captivity, one died when a prisoner transport ship sank. Two others died in captivity in North Korea. They’re all listed on the memorial.

OKMULGEE, OK--The Creek Nation dedicated its Prisoner of War statue Tuesday morning (May 29, 2012) outside the tribe's veteran's building in Okmulgee.

The statue is proudly displayed outside the tribe's veteran center in Okmulgee. Among the crowd, are two very distinguished guests: the last surviving tribal members held as POWs.

One of those treasures is 93-year-old Phillip Coon, who joined the military as a young man, was captured and forced on the Bataan Death...