TAHLEQUAH, Okla.-Two Confederate monuments were lifted by crane and removed from the Cherokee Nation Capitol Square in Tahlequah Saturday as directed by Principal Chief Chuck... — Updated 8/6/2020

PICKLE LAKE, Ont.-CJTL (Christ Jesus the Light) Radio was started in Ontario, Canada in 2005, when an alliance was formed between a group of First Nation believers and Nations One... — Updated 8/6/2020

Washington, DC-On July 13, the Washington National Football League team retired their infamous team name: The Washington Redskins. The interim name for the 2020 season, while they... — Updated 8/6/2020

WINDOW ROCK, Ariz.-The Naabik'íyáti' Committee of the 24th Navajo Nation Council heard from programs and utilities Friday, May 22 on the water infrastructure needs aimed at... — Updated 6/12/2020

PHOENIX, Ariz.-As Miss Shoshone-Bannock, Stormie Perdash has represented her people all across the United States. Now, amid the coronavirus pandemic, she's representing them in a... — Updated 6/12/2020

PHOENIX, Ariz.-Time, distance and technology limitations are among the reasons Native Americans may be the most difficult demographic to count in the 2020 census, the Census Bureau... — Updated 4/10/2020

OTTAWA, Ont.-A January 2020 report released by the Correctional Investigator of Canada shows that Canada's prisons are being "Indigenized," or filling up with Indigenous men and... — Updated 4/8/2020

TAHLEQUAH, Okla.-The Cherokee Nation is the first tribe in the United States to receive an invitation to deposit its traditional heirloom seeds to the Svalbard Global Seed Vault, a... — Updated 4/8/2020

On Friday, October 4, Indian Life hosted a banquet at Calvary Temple in Winnipeg to celebrate 40 years of ministry. We thank all those who contributed to organizing the banquet and... — Updated 4/8/2020

"We are not ready for this"

WASHINGTON-Dean Seneca didn't mince words after the Centers of Disease Control and Prevention's "damaging news" in early March about the spread of the novel coronavirus that has... — Updated 4/7/2020

WASHINGTON-In the wake of the coronavirus (COVID-19) global pandemic, tribal nations -comprised of some of the most vulnerable communities in the United States-have been left out... — Updated 4/7/2020

WASHINGTON, D.C.-Recently, the Smithsonian's National Museum of the American Indian, which sits on the National Mall in Washington, broke ground for construction of the Native... — Updated 11/3/2019

CHEROKEE NATION-Cherokee Nation Principal Chief Bill John Baker is sending out a message that might be a wise reminder for all Native Americans. "Native people have been... — Updated 8/20/2019

On a January day in 1988, I received a call from a George McPeek in Winnipeg, Manitoba, Canada. He called inviting me to come check out Intertribal Christian Communications, of whic... — Updated 8/20/2019

ADA, Okla.—Chickasaw Nation Governor Bill Anoatubby recently announced a partnership between the U.S. Census Bureau and Chickasaw Nation to help ensure Native Americans are counted accurately during the 2020 census. “There has... — Updated 6/3/2019

Winnipeg-In April, Indian Life newspaper received the Award of Merit in the Evangelical Press Association's annual Awards of Excellence contest. The contest had more than 1200... — Updated 6/3/2019 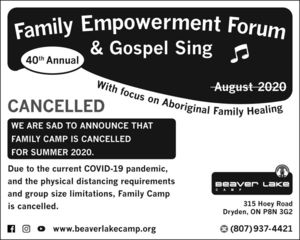